Public teachers continue to be in the national spotlight as kids finish their first month of school amid the coronavirus pandemic. Many teachers around the country are reporting insufficient COVID-19 guidelines from school officials, kids not showing up for remote classes and long extra working hours with no extra pay. Historical data shows how teachers’ pay relative to other professions has been dropping for decades, with the continuation of this trend moving into 2020 putting even more stress on teachers across the country.

In data from the Economic Policy Institute, the difference in weekly wages for public school teachers last year was 19.2 percent below that of their nonteaching, college-educated peers. That continues the trend for public school teachers historically getting paid less than the average college-educated professional. In 2000, public teachers saw one of the largest discrepancies in pay at over 20 percent below that of their peers.

This systemic wage penalty compared to other professions has been true since the 1960s and 1970s, when public school teachers last made a wage premium of nearly 15 percent more than other professionals. Now, both men and women public teachers are making far less, with men earning an astounding 30 percent less than other college-educated peers. According to the Economic Policy Institute, this could be contributing to why only 25 percent of public school teachers are men.

While public teachers often enjoy a better benefits package than their college-educated peers, the Economic Policy Institute notes that these benefits don’t make up for the rapid erosion of wages over the past two decades. Historically, strikes and unionization have lessened the wage penalty in some states. In most states, however, striking as a teacher is considered illegal even as part of an organized union. 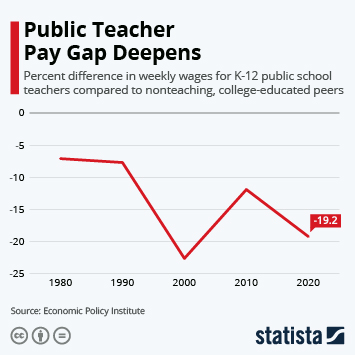