According to an analysis from the Massachusetts Institute of Technology, the minimum wage does not suffice to pay for a typical set of living expenses in any state of the United States. Virginia, Hawaii and Georgia, where the living wage gap exceeded $8 per hour, fared the worst.

While Virginia and Georgia only apply the federal minimum wage of $7.25 per hour, Hawaii has a substantially higher minimum wage of $10.10. Yet, the extremely high living costs on the inland group created the second-highest living wage gap in all of the country.

In general, states which stuck to the federal minimum created above average gaps. Out of the 22 states which had a living wage gap between $6 and $8, 18 were on the federal minimum wage. Here, states including or in the vicinity of major cities were the outliers, with California, New York, Maryland and Florida exhibiting living wage gaps of more than $6 despite mandating higher minimum wages.

The smallest gaps could be found in Washington, Maine and Arizona, where minimum wages of $12 and above met more moderate costs of living.

To calculate the living wage, typical housing, living, childcare and healthcare expenses were calculated for the respective areas. 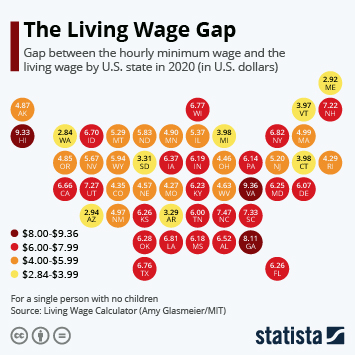 This chart shows the gap between the hourly minimum wage and the living wage for a single person with no kids by U.S. state in 2020 (in U.S. dollars).