Outbreaks of the coronavirus have been subsiding in the U.S., the EU, India and Russia. After an initial decline, the picture in Brazil, the third most affected country in the world, looks more mixed. While Europe, Russia and the U.S. are just coming out of major outbreaks accompanied by restrictions to public life, India did not experience increased virus activity in the fall. COVID-19 cases have continued to fall for months, baffling observers.

As shown in our chart with data from the European CDC, India started its outbreak later than the EU and the U.S. and did not manage to dent the growth of infections majorly in the summer of 2020, resulting in a more continuous growth and decline of infection numbers. Russia - like the EU - had a distinctive first wave and seems to have beat the second one around the turn of the new year without a second full lockdown.

According to the Washington Post, considerable levels of India’s urban populations – for example in Delhi or Mumbai – have been acquiring antibodies, leading to a decline in new cases. But pockets of immunity do not mean that the country cannot experience a second wave, however, especially one tied to a virus mutation or involving less immune rural populations.

While the U.S. and the EU are home to around 330 million and 450 million people, respectively, 1.35 billion live in India and 210 million in Brazil. 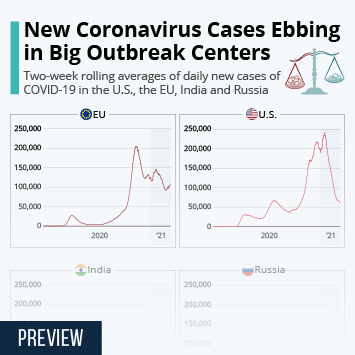 This chart shows the number of daily new COVID-19 infections in the EU, the U.S., India and Brazil in 2020 and 2021 (two-week rolling averages).