IPOs are having a real blockbuster year in South Korea with many prominent ventures looking to raise money through the stock market.

Krafton nevertheless raised the equivalent of $3.8 billion through the listing on Korea’s benchmark KOSPI index, making its IPO the second largest in Korea ever after the stock market listing of Samsung Life Insurance in 2010 ($4.4 billion raised). Both IPOs will be surpassed by the mammoth IPO of LG Energy Solutions planned for Q3 of this year, however. The electric vehicle battery maker is expected to raise around $9 billion.

Where there’s a lot of IPOs, there is always some hiccups as well. Fintech company Kakao Pay – backed by Chinese venture Ant Financial among others – had planned its IPO for August, but as regulators told them to fix their filing, the IPO is likely delayed. This is a problem also faced by its famous backer, which had its IPO, then expected to become the world’s largest, called off by the Chinese authorities in 2020. Ant was looking to raise almost $35 billion on the exchanges in Hong Kong and Shanghai, but as regulators around the world are trying to reign in the unregulated online payment and lending market, fintech companies have struggled to go public.

Hyundai Heavy Industries, a more traditional company with an innovative outlook, is launching an IPO in September. The shipbuilder is looking to raise around $1 billion to invest into developing ships powered by alternative fuels. 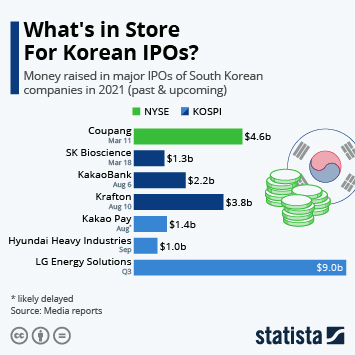 This chart shows money raised in major IPOs of South Korean companies in 2021 (past & upcoming).