India just celebrated giving out its billionth vaccine dose against the coronavirus. This means that, despite the size of the Indian population, the subcontinent is almost pulling its weight in the global vaccine arena.

Numbers aggregated by Our World in Data show that 1.02 billion vaccine doses mean that almost 15 percent of global coronavirus inoculations had been given out in India as of October 25, just a little under the Indian share of the world's population calculated by the U.N. Population Division to be 17.7 percent. When comparing the share of the fully vaccinated population, however, it becomes apparent that India still has a long way to go in the mammoth task of inoculating its population against COVID-19. With one billion doses given out, technically 35 percent of Indians could be fully vaccinated, but due to longer wait time with the AstraZeneca/Covishield vaccine, many people are still waiting for their second dose. The rate of the fully vaccinated in the country is currently approaching 22 percent.

China, on the other hand, has given out almost a third - or 2.25 billion doses - of all global coronavirus vaccine doses, exceeding its share of the world population by almost 80 percent. The U.S. and the European Union have also given out more doses than their "fair share", but they are only exceeding their rates by around 40 to 50 percent.

If a country had given out the same amount of doses than its share of the would population, technically around 50 percent of its inhabitants could be fully vaccinated. With double the doses, a country could technically fully vaccinate its whole population. This is reflected in rates of full vaccination of between 55 and 65 percent in the United States and the European Union and of upwards of 80 percent in China. 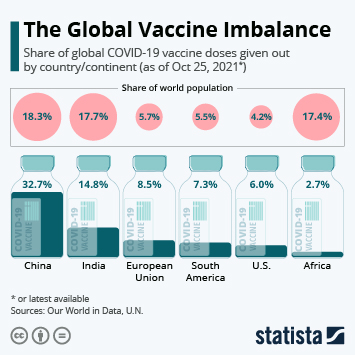 This chart shows the share of global COVID-19 vaccine doses given out by country/continent and those countries'/continents' share of the worlds' population (as of Oct 25, 2021).