Music streaming providers are known for keeping details about their royalty models close to their chest. The only notable exception in recent months was tech giant Apple, which released a statement regarding its payout model back in June. According to this document, its average per-play rate is $0.01, which means that each stream is counted as one cent towards the payout for the publisher holding the rights to the material. Even though this is a comparatively low rate in the greater scheme of things, it still places Apple Music at the top of the payout ranking.

As our chart based on data collected by Digital Music News, The Trichordist and Forbes shows, French streaming service Deezer places second with about 185 plays needed for a $1 payout. Apple's GAFAM competitor Amazon comes in third with roughly $0.005 per Stream, which equates to about 200 plays for earnings of $1 on the platform. The market leader Spotify ranks fourth with a per-play rate of roughly $0.0032 and an average of 312 plays needed to earn $1. While this rate can be seen only slightly below average in comparison, the Swedish music streaming service boasts almost triple the amount of paying subscribers as each of its direct competitors, calling into question the fairness of its business model. CEO Daniel Ek has routinely downplayed such criticism and cited artists' lack of engagement as a possible reason for low payouts. Instead of only releasing a new album every couple of years, Ek told music consultancy firm Music Ally in July of 2020 that "it is about putting the work in, about the storytelling around the album, and about keeping a continuous dialogue with your fans".

This dialogue with fans of course is dependent on those fans wanting to support specific artists, a model that has been adopted by Chinese streaming service Tencent Music. While the streams themselves don't contribute much to the actual payout, the streaming platform has introduced micropayments such as tipping to further support artists. It not only makes most of its revenue via a commission on these one-off payments but also opens up another avenue for artists to earn money on streaming platforms. This model's not as easily adaptable as one might think though, with online tipping culture called "da shang" being commonplace in China, but relatively unusual in Western countries.

While payout mechanics and models may still require improvement, music streaming has become the most important revenue source in the recorded music segment. In 2020, 62.1 percent of earnings came from streaming services, with physical records and downloads making up for 19.5 percent and 5.8 percent, respectively. 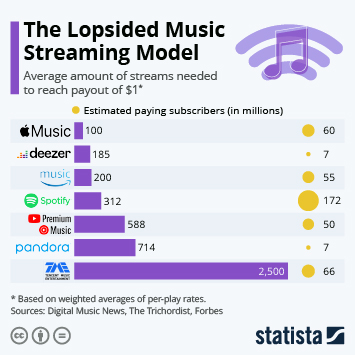 This chart shows the average amount of streams needed to reach a payout of $1 by streaming provider.