On December 8, 2020, Margaret Keenan made history. The 90-year-old woman from Coventry, England became the first person to receive an approved Covid-19 vaccine. Twelve months later, more than eight billion doses have been administered worldwide, making the fight against Covid-19 the largest and fastest vaccination campaign in history.

Considering the scale of the ongoing vaccination drive, it doesn’t come as a surprise that the companies making the vaccines stand to make a lot of money with them. In its latest earnings report, Pfizer, the most prominent example, projected that its Covid-19 vaccine would generate $36 billion in revenue this year, helping the company almost double its total sales.

And yet, looking at the pharmaceuticals market as a whole, vaccines remain a relatively small segment of the trillion-dollar industry. According to estimates from Statista’s Health Market Outlook, total vaccine revenue (incl. not only Covid vaccines) will amount to roughly $89 billion this year, which is less than 10 percent of global pharmaceutical sales, which are projected to reach $1.05 trillion in 2021.

With more than $175 billion in estimated sales, oncology drugs remain the largest segment within the pharma industry, while diabetes and anti-rheumatic drugs with roughly $55 billion in sales each were surpassed by vaccines this year. 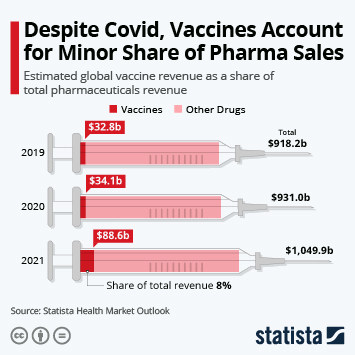 This chart shows global vaccine sales as a percentage of total pharmaceutical sales.