If the rest of its shareholders agree, Tesla CEO Elon Musk will buy the social media platform Twitter for roughly $44 billion or $54.20 per share after already acquiring a nine-percent stake in the company three weeks ago. Under Musk, the microblogging service established in July 2006 will allegedly be further tooled towards propagating free speech, an idea the tech entrepreneur called the "bedrock of a functioning democracy" in a recent tweet.

Interestingly, the same argument about providing room for free speech was also the driving force behind Twitter's right-wing clones Parler, Gettr and Truth Social, the latter of which was founded by ex-president Donald Trump. As our chart based on company statements and research by Sensor Tower shows, these clones will most likely never catch up to their inspiration.

At the beginning of April 2022, Trump's social media network saw 1.2 million app downloads since its launch this past February, with downloads slipping below 100,000 per day only four days after the site went live. Gettr, which was launched by former Trump aide Jason Miller, boasts roughly four million registered users, while Parler, the elder statesman among Twitter's conservative and right-wing clones, allegedly had around 16 million registered users in 2021.

The latter was implicated in research surrounding the storming of the U.S. Capitol on January 6, 2021 and subsequently removed from Google's and Apple's app stores, while Amazon terminated its Web Service hosting contract with the site. While Gettr and Truth Social have not been implicated in similar events, they are nonetheless seen as far-right echo chambers and hotbeds for islamophobic, antisemitic and right-wing content. 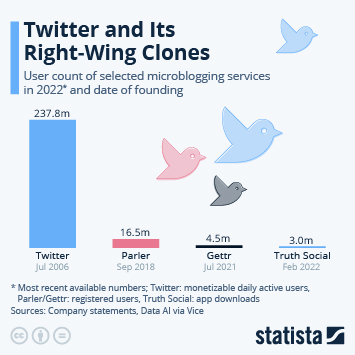 This chart shows the user count of selected microblogging services in 2021/2022.