The UK’s recent heat wave saw a rise in the number of people drowning in lakes, canals, quarries and rivers, raising the question once more of whether enough is being done to prevent these deaths. According to media reports, between 5 - 19 July, at least 13 people died when taking to the waters.

Most drownings happen in the summer months of the year in the UK, with July usually the worst, as people seek out reactional ways to cool down. Dawn Whittaker, the chief fire officer of East Sussex fire and rescue, told The Guardian: “This is predominantly young people jumping into cold water, not understanding what the potential implications are.” She explained that not only can cold water make the body go into shock, but teenagers may also not be cautious enough when it comes to swimming in dangerous spots such as weirs and reservoirs that might contain machinery.

As the latest data by the Water Incident Database (WAID) shows, far more men are drowning than women. In fact, out of the 277 fatal drownings in the UK last year, 83 percent of them were male. Men in older age brackets are also seeing higher numbers of deaths than women, with 36 men having lost their lives to accidental drowning between the ages of 30-39 in comparison to only three women in that age group.

According to Piedmont, this is partly because men are more likely to try to swim under the influence of drugs and alcohol. This correlation was also noted in WAID’s annual report, revealing that in 68 out of the total 277 fatalities, victims had been under the influence. This was particularly prevalent in the 40-49 aged category, where 18 of the 34 deaths recorded usage.

Campaigners are now calling to raise awareness about the dangers of swimming in cold water, as well as water borne diseases like leptospirosis, and not knowing how deep the water is. 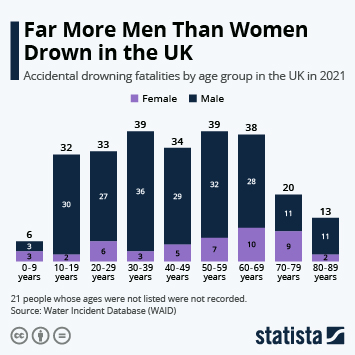 This chart shows the number of men and women that died from drowning in the UK in 2021.