Depending on the country of comparison, U.S. residents are paying twice as much, three times as much or even more for their prescription drugs. Research by Rand Corporation has found that U.S. prescription drug prices surpass those in 32 other countries by around 150 percent on average. U.S. patients are even paying triple the price for Rx drugs as Koreans, Portuguese and Australians and 3.5 times as much as Slovakians, Greeks and residents of some of the Baltic countries.

Turkey saw the cheapest prescription drug prices in the comparison, with Americans paying almost eight times as much as residents there. Adjusting the findings for per-capita income explained a portion of the difference in international drug prices, the makers of the report found, but not all.

After the U.S., Mexico, Chile and Switzerland had some of the most expensive prescription drug prices. In the case of all three countries, an inadequate supply of cheaper generic drugs is the reason for comparably high prices. In the case of the U.S., generic prescription prices were about average in an international comparison, highlighting how much more expensive brand name drugs are in the country. Considering only brand-name drugs, Americans are paying 240 percent more for prescriptions than other countries.

Limited competition among U.S. drug companies has been pointed out as one of the reasons explaining the big gap between U.S. Rx spending and the rest of the world. A regulatory apparatus that is focused on safety, but not on affordability, is another. These price checks are present in European countries, explaining comparably low prices in high-income countries like the UK, France or Germany. Likewise, all other developed nations severely restrict the advertisement of prescription drugs, which is another spending source for pharmaceutical companies with the potential to increase prices as well as consumption of branded drugs.

The imminent passage of the new climate and health care reconciliation bill will change the status quo at least for those drugs bought under public health care program Medicare in the U.S. Under the bill, Medicare is allowed to renegociate drug prices, while out-of-pocket cost will be capped at $2,000 per year. As the legislation is passed in a party line vote under budget reconciliation - thereby allowing Democrats to circumvent the filibuster in the Senate - more sweeping pricing reforms, for example a monthly cap on insulin prices for all Americans, could not be included per Senate rules. 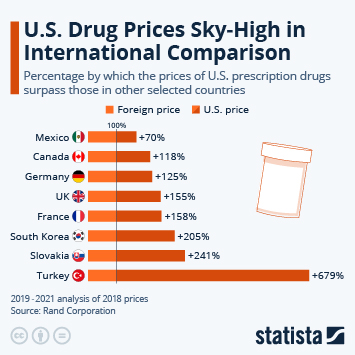 Percentage by which the prices of U.S. prescription drugs surpass those in other selected countries.