88.9k
Over the past few years, Twitter has become much more than a place to share selfies and cute cat videos. Instead it serves as an important platform for political discussion and commentary in many countries. The company’s latest transparency report, published earlier this week, shines a light on the extent to which some countries try to control what messages are spread across the popular social network. In total, Twitter received 796 content removal requests in the second half of 2014, an increase of more than 80 percent compared to the previous six months.

Turkey, whose president Erdogan had once vowed to „eradicate“ Twitter before blocking the service temporarily in March 2014, made 477 removal requests between July and December 2014 - more than all other nations combined. Interestingly, Twitter states to have filed objections to more than 70 percent of the Turkish requests because of interferences with freedom of speech or other deficiencies. However, Twitter’s objections were mostly struck down by Turkish courts and the company finally gave in to 50 percent of the Turkish requests. In the end, Twitter withheld 1,820 tweets and 62 accounts in the country.

Behind Turkey, Russia made the second most requests to have content / users banned from Twitter. The Russian authorities, who have a history of trying to silence regime critics, brought forward 90 requests in the second half of 2014, of which most (87 percent) were denied by Twitter.

The numbers presented in the transparency report indicate that Twitter is fully aware of its role in political discourse. The fact that the company only granted 13 percent of all removal requests in the past six months shows that it doesn’t take the decision to block content lightly and can be interpreted as a testament to freedom of speech and political expression. 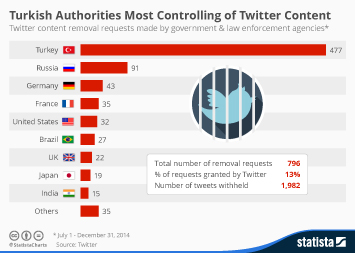 This chart shows the number of content removal requests Twitter received from government & law enforcement agencies in the second half of 2014.