That's a faster pace of growth than the additions in the next nine countries combined Japan, China, Germany, the Netherlands, Brazil, India, Spain, Canada and Switzerland. With 4.45 million individuals, China has the second highest millionaire population and it grew by 158,000 since 2018. Japan came third with 3.03 million and 187,000 newcomers. Not all developed countries recorded gains, however. 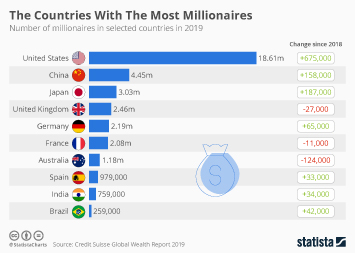 This chart shows countries by the number of dollar millionaires in 2019.