2021 was another good year for the music industry. According to IFPI’s latest Global Music Report, worldwide recorded music revenues totaled $25.9 billion last year, up 18.5 percent from the previous year’s total of $21.9 billion. This marks the seventh consecutive year of growth for the global music industry after nearly two decades of gradual decline.

Interestingly, the transition to digital distribution has both fueled the music industry’s decline and helped stop it. After the golden age of the CD, which propelled worldwide music revenues to unprecedented highs through the 1990s, the advent of MP3 and filesharing hit the music industry like an earthquake. Between 2001 and 2010, physical music sales declined by more than 60 percent, wiping out $14 billion in annual revenue. During the same period, digital music sales grew from zero to $4 billion, which wasn’t even remotely enough to offset the drop in CD sales. It wasn’t until the appearance and widespread adoption of music streaming services that the music industry’s fortunes began turning around again.

According to data published by IFPI, the music industry bottomed out in 2014, when revenue was at a 20-year low of $14.2 billion, nearly $10 billion less than it had been 15 years prior, when physical music sales alone had amounted to $24 billion during the peak of the CD era. After some initial hesitance by the music industry to embrace streaming services, record labels and artists appear to have followed consumers’ lead in accepting that the future of music lies in digital distribution. Last year, digital music accounted for the lion's share of worldwide music revenues, with streaming services alone accounting for 65 percent of the industry’s total haul. According to IFPI, 523 million people were using a paid music streaming subscription by the end of 2021 and streaming revenues are now considerably bigger than digital download sales ever were.

All statements in this article attributable to IFPI represent Statista’s interpretation of data, research opinion or viewpoints published as part of the IFPI Global Music Report in March 2022, and have not been reviewed by IFPI. Each IFPI publication speaks as of its original publication date (and not as of the date of this article’s publication). 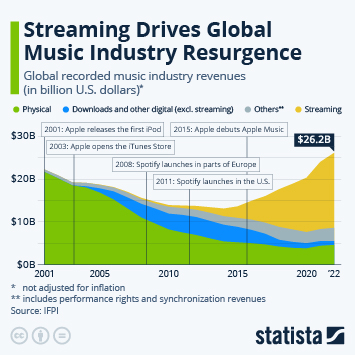