88.9k
Spotify announced its long-awaited IPO yesterday - the Swedish music streaming giant will go public in a direct listing in the coming weeks. A look into the filing reveals an impressive 159 million monthly active users, generating $4.6 billion of revenue in 2017. Accompanying these figures, though, is a less than savory net loss of $1.4 billion.

Music streaming is proving itself to be a very hard sector to turn a profit in. Spotify’s main rivals, Apple and Amazon don’t report their streaming financials separately, but by way of comparison, this infographic looks at the 75 MAU strong Pandora. Both companies are generating well over $1 billion in annual revenue from advertising and subscriptions. Yet both companies share the same problem: As user numbers rise and revenue subsequently increases, so do licensing fees and other costs. While both companies have solid revenue streams, both are far from profitable. An analysis a couple of years ago published by Generator Research concluded that the streaming business in its current state was "inherently unprofitable" and that "no current music subscription service…can ever be profitable, even if they execute perfectly.”

Apple and Amazon have one huge advantage over their competitors though: they don’t actually need to make money from streaming. Apple will likely be happy to take a loss with its streaming service, as long as it gets people to buy more of the company's devices. Similarly, Amazon will be more than content if their service attracts more Prime customers. Spotify and Pandora don't enjoy the luxury of a profitable billion dollar business supporting their services though, and will at some point need to figure out how to actually make music streaming profitable. 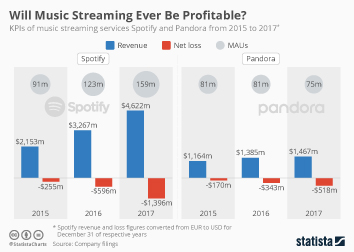 This chart shows KPIs of music streaming services Spotify and Pandora from 2015 to 2017.