Published by Daniela Coppola, Sep 12, 2022
Amazon Prime is a fee-based membership program that provides customers with a wide range of exclusive offers. Benefits include free premium delivery, exclusive deals and discounts, and subscriber-only digital and streaming media content that Prime users can access for a monthly or annual fee. Since the service was first introduced to domestic shoppers in 2005, it has expanded to over 20 other countries and raised the global number of Prime members to more than 200 million.

How big is Amazon Prime?

In the United States, industry sources estimated a subscriber count of 153 million in 2021. In 2021, roughly 65 percent of all U.S. Amazon shoppers were Prime members, reflecting the service’s strong appeal to platform users. Seeing that Prime has significantly raised the bar for online shopping in terms of convenience and comfort, subscriptions are forecast to slightly increase in the future.
Even though price of a Prime membership increased in 2022 – especially in European countries where inflation is hitting the most –, the variety of offered shipping options and services remains unchallenged. Besides free deliveries and tailored deals, Prime users can also benefit from exclusive discounts over Amazon Prime Days, the annual shopping event generating increasing sales worldwide.

Benefits of a Prime membership

Globally, Prime members tend to have a more positive perception of Amazon services compared to non-Prime users. More specifically, data on North American markets revealed that Amazon successfully capitalizes on its loyal shoppers, once they overcome the cost obstacle. Nearly half of U.S. paying Prime subscribers are likely to renew their membership and, most importantly, U.S. Prime users tend to shop multiple times a month on Amazon. Over 40 percent of them placed between two and four orders a month, while another 36 percent of them finalized five to nine online orders. Lastly, surveys carried out in Canada suggested that Prime subscribers are familiar with Subscribe & Save, the delivery program which automates regular ordering and shipping of certain items at a lower price.

In the following 5 chapters, you will quickly find the 27 most important statistics relating to "Amazon Prime".

The most important key figures provide you with a compact summary of the topic of "Amazon Prime" and take you straight to the corresponding statistics.

Amazon Prime Day in the UK 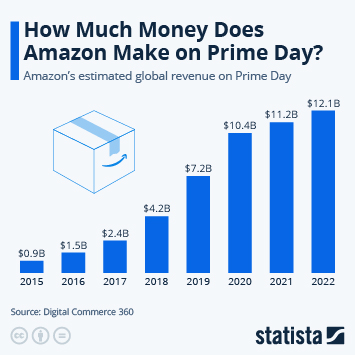 Prime Day Is a Big Win for Amazon 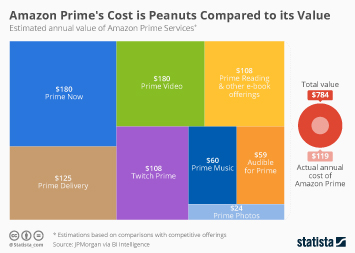 Amazon Prime's Cost is Peanuts Compared to its Value