U.S. President Joe Biden issued the first three pardons of his term in office and shortened the sentences of 75 people who had been charged for non-violent drug offenses. The move comes as part of his administration’s attempt to overhaul the criminal justice system, and was followed up by the Justice and Labor Department’s announcements of rolling out a $145 million plan to provide job skills training to people who had previously been incarcerated, and the Small Business Administration’s plans to make it easier for people who had been through the criminal justice system to apply for loans.

The current president seems to be picking up the reins where his former running mate and ex-president, Barack Obama, left off. Obama gave the most commutations ever while in office, reducing the sentences of 1,715 people over his tenure, which were also mostly for non-violent drug-related offenses.

As the longest serving president, Franklin D. Roosevelt gave more pardons and commutations than any other to date, with a total of 2,819 people. Many of these were for people convicted of violating prohibition. As our chart shows, Harry S. Truman also forgave a lot of people. According to USA News, many of those to be pardoned had been convicted of violating the Selective Training and Service Act of 1940, which implemented the military draft in the run up to America’s entry into World War II.

It’s worth noting that Biden’s figures will likely rise further yet, as it has become commonplace that presidents grant executive clemency actions in the last days in office, or the ‘11th hour’, as they try to push through their promises before the next head of state is sworn in. 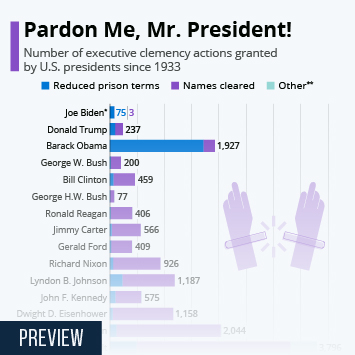 This chart shows the number of executive clemency actions granted by U.S. presidents since 1933.