Published by
Thomas Alsop,
Nov 15, 2022
Virtual reality (VR) headsets are devices that enable user participation in VR – simulated experiences that can be similar to or completely different from the real world. VR headsets aim to create a sensory experience for the user, including visuals and sound. The effect is commonly created by devices that consist of a head-mounted display (HMD), a wraparound headset that does not allow light or images from the real world to interfere with the virtual one. Both the enterprise and consumer segments of the VR headset market, including the increased development of the VR gaming industry, are expected to grow in the coming years.

VR headsets can be categorized into two types: standalone and tethered. Standalone VR headsets are not connected to another device and can therefore be controlled entirely via the headset itself, making it easier to handle. Standalone VR headsets have built-in processors, sensors, batteries, storage memory, and displays. Alternatively, tethered VR headsets are devices that are connected to a PC or smartphone via a cable. Such headsets typically require more computing power to deliver superior VR experiences, for example, high-quality graphics used in certain VR gaming applications.

One of the most popular VR headset brands is Meta Quest and, with a retail price of 399 U.S. dollars, Meta Quest 2 is one of the more affordable VR headsets on the market. The company has also released Meta Quest Pro, an upgraded version of their best-selling VR headset with a price tag of 1,500 U.S. dollars. Other notable VR headset brands include Sony, HTC, Valve, and Pico. It is expected that Meta will face even greater competition in the coming years as technology firms release new VR devices onto the market. One example is Apple who has expressed its interest in entering the VR headset market, with the company set to release the first such product in 2023.

In the following 6 chapters, you will quickly find the 30 most important statistics relating to "VR headsets". 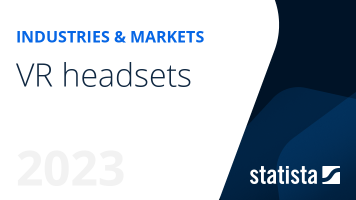 The most important key figures provide you with a compact summary of the topic of "VR headsets" and take you straight to the corresponding statistics.

VR headset market in the U.S.

XR: AR, VR, and the metaverse

Video gaming and the metaverse

Fashion in the metaverse