Virtual reality (VR) is a simulated experience similar to or completely different from the real world. VR aims to create a sensory experience for the user, sometimes including sight, touch, hearing, smell, or even taste. The industry is growing at a fast pace, with the global VR market size projected to increase from less than 12 billion U.S. dollars in 2022 to more than 22 billion U.S. dollars by 2025. Both the enterprise and consumer segments, including the increased development of the VR gaming industry, are expected to profit from the forecast growth.

Currently, standard VR systems use VR headsets or multi-projected environments to generate realistic sensations that simulate a user's physical presence in a virtual environment. The effect is commonly created by VR headsets consisting of a head-mounted display (HMD) - a wraparound headset that does not allow light or images from the real world to interfere with the virtual one. VR headset suppliers include Meta (previously Oculus), Pico, Sony, HTC, and Valve.

Analysts suggest that improvements to VR hardware, such as the introduction of smaller and more fashionable devices, will support the increased adoption of VR by consumers and across industries. Healthcare, workforce development, and manufacturing are expected to be among the sectors most disrupted by VR technology. Examples of VR in use include training simulations for surgeons and production operatives, and immersive teaching experiences within the classroom. As a result, the economic benefits of VR are expected to be felt worldwide, growing considerably as use cases widen and develop.
This text provides general information. Statista assumes no liability for the information given being complete or correct. Due to varying update cycles, statistics can display more up-to-date data than referenced in the text.

Thomas Alsop
Research expert covering the global hardware industry
Get in touch with us now
Published by Thomas Alsop, Oct 20, 2022 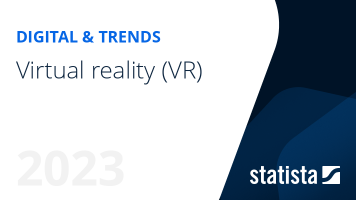 The most important key figures provide you with a compact summary of the topic of "Virtual reality (VR)" and take you straight to the corresponding statistics.