Meta Quest is the branding assigned to a series of virtual reality (VR) headsets developed by Meta, the company formerly known as Facebook. The name change was first announced in October 2021, and reflects the company’s growing ambitions beyond social media, notably bringing the metaverse to life. Alongside this included the rebranding of its VR products to Meta, shifting away from the original brand name of Oculus, with the company also revealing that it would start reporting the financial results of its augmented reality (AR) and VR business.

The Reality Labs business segment of Meta is the corporate successor to Oculus, a company that was founded in 2012 before being acquired by Facebook in 2014 for 2.3 billion U.S. dollars. To support the continued innovation of AR/VR technologies, Meta operates 12 Reality Labs research facilities around the world. In 2021, Meta generated 2.3 billion U.S. dollars in revenue from its Reality Labs business segment, amassed from the delivery of consumer hardware products such as Meta Quest, Facebook Portal, and wearables, as well as related software and content.

Meta Quest devices are among the most popular VR devices available on the market. The company’s latest product is Meta Quest Pro and features an all-new design, ten sensors (both inward and outward facing) and revamped optics. Previously referred to as Project Cambria, Meta Quest Pro is an upgraded version of consumer-orientated Quest devices such as Meta Quest 2, with the Pro version regarded as more of an enterprise-level VR headset due to its 1,500 U.S. dollar price tag. Meta Quest 2 (formerly Oculus Quest 2) is also a standalone VR headset and retailed at 399 U.S. dollars, making it one of the more affordable VR headsets on the market.

In 2022, a price adjustment of 100 U.S. dollars was made by Meta to the Quest 2 to “continue to grow [its] investment in groundbreaking research and new product development that pushes the VR industry to new heights”. It is expected that Meta will face stiff competition in the coming years as other technology firms release AR/VR devices onto the market. Other notable VR headset brands include Sony, HTC, Valve, and Pico. The latter, a Chinese VR company owned by the TikTok parent company ByteDance, has set Meta in its sights with the release of its Pico 4 VR headset.
This text provides general information. Statista assumes no liability for the information given being complete or correct. Due to varying update cycles, statistics can display more up-to-date data than referenced in the text.

Thomas Alsop
Research expert covering the global hardware industry
Get in touch with us now
Published by Thomas Alsop, Oct 12, 2022 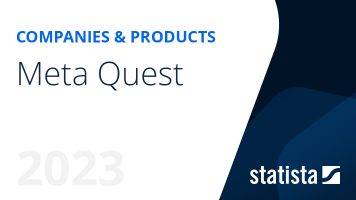 The most important key figures provide you with a compact summary of the topic of "Meta Quest" and take you straight to the corresponding statistics.