In line with the rise of nuclear energy since the 1950's, uranium has become a pivotal commodity. This is especially true for countries that are highly dependent on nuclear energy to fulfill their domestic energy needs. Global uranium production stood at some 54,752 metric tons in 2019. With a production of approximately 22,808 metric tons, Kazakhstan is the largest single producer of uranium in the world. Other top uranium producers include Canada, Australia, and Namibia.

Largest uranium mines in the world

Kazakh state-owned KazAtomProm is the world’s leading uranium company, having produced about 12,229 metric tons in 2019 (or 13,291 metric tons when the company's fifty percent stake of Energy Asia's production is included). French Orano and Canadian Cameco follow in second and third place, respectively. In the same year, only 14 companies accounted for 94 percent of the total global mine production of uranium.

The leading consumers of uranium worldwide are the countries with the highest share of nuclear energy: the United States, France, and China. The U.S. used nearly 19,200 metric tons of uranium in 2018. That was more than twice as much as France, which ranked second. Although there are global tendencies towards alternative energies, projections for nuclear energy consumption show a distinct increase until 2035. This means that uranium will continue to be an important commodity for decades to come.
This text provides general information. Statista assumes no liability for the information given being complete or correct. Due to varying update cycles, statistics can display more up-to-date data than referenced in the text.

Uranium mine production worldwide 2021 by country 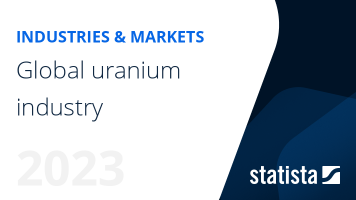 The most important key figures provide you with a compact summary of the topic of "Uranium" and take you straight to the corresponding statistics.