Published by Statista Research Department, Aug 2, 2022
The age of commercial nuclear power dates to the mid-1950s, with the first nuclear power plant connected to an electric grid at Obninsk in the USSR. By the turn of the century, nuclear power accounted for about one third of the European Union’s gross electricity generation. Nevertheless, both the EU’s installed nuclear capacity and its contribution to the power mix have declined over the past two decades. With significant inherent risks like long-term storage of radioactive waste and the potential for devastating accidents, public policy regarding nuclear power in the region varies greatly by country.

The prominent role of nuclear energy in Europe was strongly questioned by many governments following the Fukushima Daiichi nuclear disaster in Japan, in March 2011. In a bold response, Germany decided to abandon its nuclear energy program entirely, and as a result has one of the highest number of permanently closed nuclear plants in Europe, alongside the United Kingdom. The German government plans to have all remaining nuclear reactors shut down by the end of 2022. Italy and Lithuania already phased out the fuel, after having operational reactors.

In contrast, many European nations still derive a significant share of their domestic electricity generation from nuclear energy despite the risks. For example, France relies on nuclear power for nearly 70 percent of its electricity generation. It has the second highest number of operable nuclear reactors worldwide and an additional reactor under construction, with nuclear power viewed as an asset by the majority of French people. Other countries such as Ukraine, Slovakia, and Belgium also source more than 50 percent of their electricity from nuclear sources.

While some of the largest nuclear power reactors under construction were located in Europe as of May 2022, the future of nuclear power on the continent is uncertain. Nuclear power consumption in the European Union is forecast to decrease in various scenarios over the next few decades, as countries continue their phase out and the operational lifetime of existing reactors come to an end. This trajectory is not set in stone, however. As the European Union strives to reach its target of net-zero emissions by 2050, and as some are calling for an end to European reliance on Russian fossil fuels following the country’s invasion of Ukraine, nuclear power may play a pivotal role in European energy policy in the years to come.

In the following 6 chapters, you will quickly find the 24 most important statistics relating to "Nuclear power in Europe".

The most important key figures provide you with a compact summary of the topic of "Nuclear power in Europe" and take you straight to the corresponding statistics.

Nuclear power in the UK 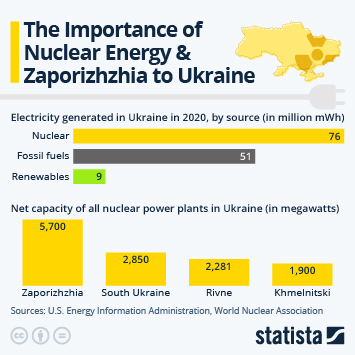