Fruit is a widely consumed food that is considered healthy and required for a balanced diet. The most produced varieties of fruit worldwide are bananas and watermelons. The greatest annual fruit harvest in the world occurs in Asia. China alone produces some 243 million metric tons of fresh fruit annually.

Fruit production in the U.S.

The United States is also an important fruit producer. For non-citrus fruits alone, around 1.8 million acres were used as bearing area in the U.S. in 2020 and the bearing area for citrus fruits was about 668 thousand acres in 2021. The majority of U.S. fruit exports went to Mexico and Canada in 2019. Grapes account for a large percentage of the total fresh fruit produced in the United States. In 2020, just under six million tons of grapes were produced at a value of almost 4.8 billion U.S. dollars. Other top fruit varieties in the U.S. include oranges, apples, strawberries and lemons.

Annual per capita fruit consumption in the United States stands at around 323.32 pounds. Bananas are the most popular fruit among U.S. consumers, followed by citrus fruits and apples. U.S. consumer prices for fresh fruit remained fairly stable over the last six years.
This text provides general information. Statista assumes no liability for the information given being complete or correct. Due to varying update cycles, statistics can display more up-to-date data than referenced in the text. 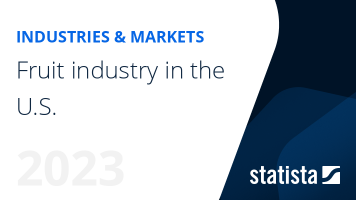 The most important key figures provide you with a compact summary of the topic of "Fruit industry in the U.S." and take you straight to the corresponding statistics.