Published by
M. Shahbandeh,
May 20, 2022
Fruit has been the staple ingredient in our diets for centuries, given its precious contribution in fulfilling human needs in term of vitamins, minerals, antioxidants, and many phytonutrients (Plant-derived micronutrients). Fruits are low in calories and fat and are a source of simple sugars, fibers, and vitamins, which are essential for optimizing our health. Given these properties, several studies suggest that one should eat at least 2-3 servings of fruit every day.

Among the great variety of fruits, citrus fruits are particularly appreciated due to various health benefits, from boosting immunity to fighting cancer. This class of fruits includes lemons, limes, oranges, and grapefruit, as well as many more hybrids and varieties. While Asia produces by far the largest amount of citrus fruit worldwide, Europe still contributes significantly to the market, ranking fourth in a regional comparison of worldwide citrus fruit production. In 2020, around 11.4 million metric tons of citrus fruit was produced in Europe. Mediterranean countries are producing the greatest amounts of citrus fruit in Europe. In Spain for instance, the production volume of oranges exceeded 3.3 million metric tons in 2019/2020.

An important segment of the fruit industry is the fruit juice industry. Fruit juice, mechanically extracted by squeezing or macerating the fruits, is highly appreciated for its refreshing character, nutritional benefits and as a good source of instant energy. Unconcentrated orange juice was the leading fruit and vegetable juice produced in France with more than 44 million liters produced annually. Orange juice was also very popular in Germany alongside apple juice, recording 7.5 liters and 6.5 liters in per capita consumption respectively. The leading fruit juice company in Europe is the Dutch Refresco Gerber, which generated more than four billion euros in revenues in the European market in 2020.

In the following 5 chapters, you will quickly find the 36 most important statistics relating to "Fruit industry in Europe". 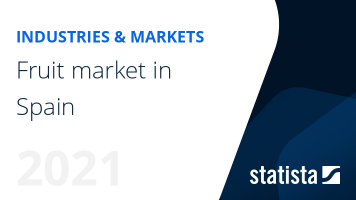 The most important key figures provide you with a compact summary of the topic of "Fruit industry in Europe" and take you straight to the corresponding statistics.

Fruit industry in the U.S.