Fresh prepared food is food that is produced for immediate consumption, sold in a variety of stores. The meals have been previously prepared by someone else, meaning that buying customers do not need to prepare, cook or slice anything. The concept is very convenient for many people and was a popular choice in the United States in 2019. That year, prepared meals were the top-selling category within grocery store deli departments that year, generating almost 15 billion U.S. dollars. Cooked meat generated approximately six billion U.S. dollars.
In 2019, about a third of all deli prepared food sales in the United States were generated from the sales of entrees specifically. Prepared salads, appetizers, and sandwiches also each accounted for a considerable share of the U.S. market. The fresh deli prepared foods that experienced the highest percentage of sales growth that year, were breakfast foods and holiday meals. In 2018, supermarkets fulfilled deli prepared food needs more than any other type of outlet in the United States: the household penetration rate of supermarkets stood at approximately 80 percent that year.

Some of the favorite deli-prepared combo meals, sold in the United States, included pizza and sandwiches. Each of these types of prepared food made up about a third of combo meal sales made in U.S. grocery stores in 2019. The country’s favorite prepared appetizer was, by far, chicken during the same year: just under 80 percent of deli-prepared appetizers sales were accounted for by the chicken category alone.

In 2019, American households would typically spend between four and nine U.S. dollars on prepared foods, such as sandwiches, soup, and mac and cheese, per trip to the store. Households typically spent just over six and a half U.S. dollars per trip on sandwiches that year. Among the various retail prepared food options, almost 60 percent of U.S. consumers reported that they would be most likely to order chicken at least occasionally. Pizza was the second most popular choice among Americans.
This text provides general information. Statista assumes no liability for the information given being complete or correct. Due to varying update cycles, statistics can display more up-to-date data than referenced in the text.

Deli department sales in the United States in 2021, by category

Sales growth of fresh deli prepared foods in grocery stores in the U.S. 2021 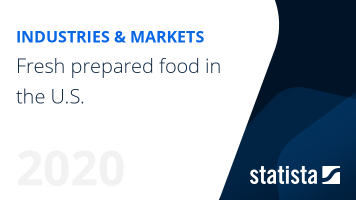 The most important key figures provide you with a compact summary of the topic of "Fresh Prepared Food U.S." and take you straight to the corresponding statistics.