Published by
Bergur Thormundsson,
Jun 29, 2022
Electrolux is one of the largest household appliances manufacturers worldwide. The company was formed in 1918 following the merging of Lux AB and Svenska Elektron AB and has its Headquarter in Stockholm, Sweden. The company's name was initially spelled "Elektrolux" but changed to its current form in 1957 and started with 400 employees, a number that has grown to more than 48,000. Electrolux made only electric vacuum cleaners when it was formed, but today manufactures all types of major consumer appliances. Frigidaire and AEG are two of the company's major brands next to its primary brand name Electrolux.

Europe and the United States are Electrolux's main markets

Electrolux's total revenue has been relatively stable between around 12 and 14 billion U.S. dollars over the past ten years up to 2021. The company generates most of its revenue from its major appliances segments in Europe and North America. These two segments together generated more than 70 percent of Electrolux's revenue in 2021. The United States, Brazil, Germany, Australia, and France are the company's major country markets. Its market share is especially high though in the Nordics countries, where Electrolux holds a 39 percent share of the core appliances segment.

After making a change to its business segmentation in early 2019, Electrolux also announced that the company would split into two separate companies, with the company's professional products business now listed as Electrolux Professional. The new company focuses on B2B food service, beverage, and laundry solutions with a wide range of customers, including restaurants, hotels, healthcare, educational and other service facilities. Following the restructure Electrolux has continued its growth worldwide.

In the following 5 chapters, you will quickly find the 30 most important statistics relating to "Electrolux". 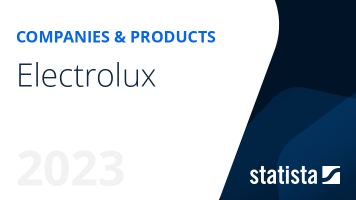 The most important key figures provide you with a compact summary of the topic of "Electrolux" and take you straight to the corresponding statistics.