Published by
Bergur Thormundsson,
Sep 22, 2022
The Whirlpool Corporation is an American manufacturer of small and major home appliances headquartered in Benton Harbor, Michigan. First established in 1911 as the Upton Machine Company, the Whirlpool Corporation name was adopted in 1950 following the launch of a range of home laundry products in response to the post-war consumer demand for convenience goods. The company is one of the leading manufacturers of household appliances with around 69,000 employees and annual revenues of around 22 billion U.S. dollars.

Whirlpool Corporation is parent to 14 major global brands that include: Maytag, KitchenAid, Bauknecht, and Jenn-Air. In addition to selling appliances under its own brands, the company is also a major producer of home appliances for other well-known companies such as IKEA and Kenmore Appliances. The company's major product categories are laundry appliances, refrigerators and freezers, and cooking appliances, which Whirlpool produces in 36 manufacturing locations across the globe. These three major segments taken together account for more than 80 percent of Whirlpool's revenue.

As a U.S.-based company Whirlpool generates the majority of its revenue in its home market. Over half of the company’s global net sales is generated in the United States and Canada each year. In 2021 Whirlpool's revenue in North America amounted to almost 12.5 billion U.S. dollars. Whirlpools manufacturing locations are primarily located in the United States, though it has manufacturing sites around the globe. Whirpool's strong market position in the United States and Canada is reflected by the brands' popularity, as the company is the most popular washing machine brand in both countries according to a Statista survey.

In the following 5 chapters, you will quickly find the 31 most important statistics relating to "Whirlpool". 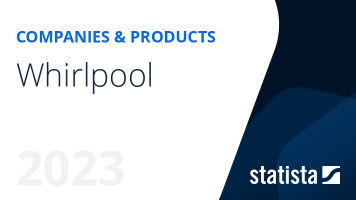 The most important key figures provide you with a compact summary of the topic of "Whirlpool" and take you straight to the corresponding statistics.