Published by Statista Research Department, Aug 11, 2022
Today, digital health already is a cornerstone of developed health systems all over the world. The definition of the term is, however, broadly conceived. Related terms such as mHealth, telehealth, health informatics, or especially eHealth, are often used as synonyms. Without question, digital health uses (latest) information and communication technologies to develop a faster, more efficient and cost-reducing healthcare practice. Since the health reform (Affordable Care Act or “Obamacare”) was aiming at more efficiency, it was widely considered as a driver for digital health solutions in the United States. But many people still have no real idea what terms like digital health, e-health or mHealth encompass.

The global digital health market was valued at over 200 billion U.S. dollars in 2020. According to recent forecasts, this figure is expected to exceed 500 billion dollars by 2024. Mobile health and wireless health are projected to be among the leading drivers of this growth. Digital health is also a basin for new investments, primarily in startups. Invested funding increased rapidly from 1.1 billion U.S. dollars in 2010 to nearly 22 billion in 2020. As expected, the United States is a leader in the digital health industry. The metro areas of San Francisco (Bay Area), New York City, and Los Angeles are major epicenters of this sector.

E-health perhaps the most established

The growth of the adoption of eHealth solutions can be seen, for example, in the use of electric medical record/electric health record (EMR/EHR) systems among physicians. While the share of office-based U.S. doctors using such systems was around 18 percent in 2001, the uptake stood at some 92 percent in 2018. Nationwide, physicians in Nevada, South Dakota, Minnesota and Wisconsin are leading regarding the adoption of EHR systems. The adoption rate is even higher among some specialized physicians.

Telehealth and telemedicine are also predicted to be of increasing importance in the near future. The global market size for telemedicine is projected to increase from around 50 billion U.S. dollars in 2019 up to nearly 280 billion dollars by 2025. The acceptance and adoption rate of telemedicine services among Americans shows a stable increase over the last five years. However, especially virtual visits, most often in the form of live video consults between patients and physicians, received a massive breakthrough in the course of the COVID-19 pandemic. The need for social distancing and avoiding contact with other patients make it a very effective alternative for most non-emergent visits.

The rapid spread of internet usage and fast internet connections, mobile devices and networks, social networking, etc. were essential preconditions for the rise of digital health. Data transfer and information exchange in real-time is a great benefit for both physicians and patients. Still, many patients don’t trust the exchange of health data due to concerns about cyber-security. On the other hand, patients can access an inexhaustible amount of health information via the internet.

In the following 6 chapters, you will quickly find the 46 most important statistics relating to "Digital health". 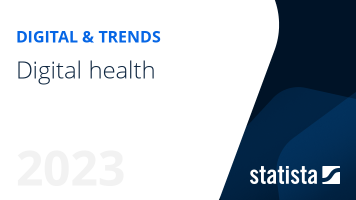 The most important key figures provide you with a compact summary of the topic of "Digital health" and take you straight to the corresponding statistics.

Internet usage in the United States 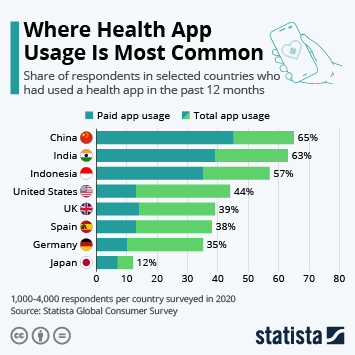 Where Health App Usage Is Most Common 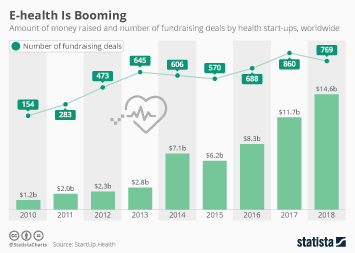