Published by
M. Shahbandeh,
Mar 24, 2022
The cocoa bean, also referred to as cocoa, is the dried and fully fermented fatty seed of Theobroma cacao, from which cocoa solids and cocoa oil are extracted. The "beans" are the essential ingredient for chocolate and cacao products. Products received from cocoa beans are not only used in chocolates, but also in a wide range of food products. Global cocoa production is expected to reach about five million tons in the 2021/2022 crop year. In recent years, the price of cocoa is well over two U.S. dollars per kilogram..

The cocoa tree is native to the Americas. It originally comes from Central America as well as some parts of Mexico. Today, nearly 70 percent of the world cacao is grown in Africa. In 2020/2021, the production of cocoa beans in Africa was estimated to be some four million metric tons, more than half of which, around 2.2 million tons, was produced on the Ivory Coast.

In the following 4 chapters, you will quickly find the 34 most important statistics relating to "Cocoa industry". 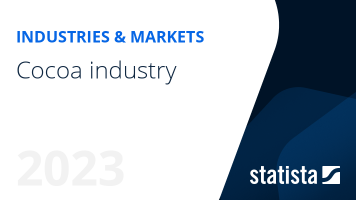 The most important key figures provide you with a compact summary of the topic of "Cocoa industry" and take you straight to the corresponding statistics. 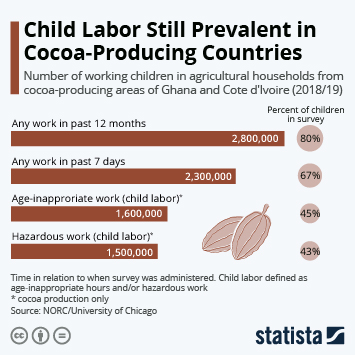