The Hershey Company - commonly called Hershey’s - is a producer of chocolates, sweets, and mints from the United States. The company was founded in 1894 by Milton S. Hershey in his hometown of Derry Church in Pennsylvania. Derry Church was renamed Hershey in 1906 following the growing popularity of the company’s products. Hershey, PA remains the company’s headquarters. Ever since its inception, Hershey's has grown to become one of the leading confectionery companies in the world.

Hershey’s generates annual net sales of almost nine billion U.S. dollars worldwide. With the exception of one year, the company’s net sales have been growing since 2006. Currently, Hershey’s has a workforce of around 18,990 full-time employees globally. Compared to previous years, this is the second consecutive increase in full-time employee numbers in since 2014. Company operations are centered around the U.S. market. With less than a billion U.S. dollars in sales, only a fraction of company sales were made internationally.

The company’s product portfolio encompasses chocolate, non-chocolate, chewing gums, ice cream, and milk drinks. Hershey’s well-known brands include Reese’s Peanut Butter Cup, Hershey’s Milk Chocolate, and Hershey's Kisses, which are amongst the most widely consumed chocolate or candy brands in the U.S. — all of them outsold Milky Way and Twix among a variety of other brands. Almost 32 million Americans treated themselves to one or two servings of Hershey’s Kisses in the past 30 days, approximately ten percent of the population. An estimated 43 million U.S. consumers chose Hershey’s Chips as their preferred brand of baking chips.
This text provides general information. Statista assumes no liability for the information given being complete or correct. Due to varying update cycles, statistics can display more up-to-date data than referenced in the text.

Number of full time employees of the Hershey Company 2008-2021

Servings of Hershey's Kisses chocolate and other candy eaten in the U.S. 2020 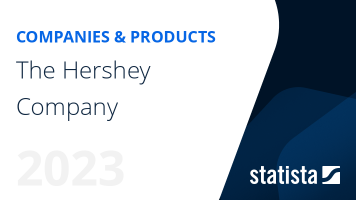 The most important key figures provide you with a compact summary of the topic of "The Hershey Company" and take you straight to the corresponding statistics.