Flowers Foods is a U.S. food production company that markets and produces packaged bakery food products for the retail and the foodservice industry. Founded in 1919, the company is currently headquartered in Thomasville, Georgia and, with annual sales of around 4.39 billion U.S. dollars, is ranked amongst some of the leading food and beverage companies in North America.
Flowers Foods’ operation is divided into two operating segments: a Direct-Store-Delivery (DSD) segment and a Warehouse Segment. By far the larger of the two, the DSD segment operates over 40 bakeries nationwide and accounted for 85 percent of generated sales. DSD segment-operated bakeries produce a wide range of products such as, breads, buns, rolls, snack cakes, pastries, and tortillas, which are delivered regionally through a network of independent distributors. Flowers Foods was ranked second nationwide amongst the leading vendors of fresh bread in the U.S. in 2021.

The company’s Warehouse Segment consists of a mix plant situated in Iowa and over ten bakeries that specialize in the production of frozen bake products that are sold via direct delivery to warehouses of retail customers nationwide. Its customer types include: restaurants, supermarkets and other retailers, mass merchandisers, quick-serve chains, food wholesalers, institutions, dollar stores, as well as vending companies. In 2020, supermarkets and drugstores generated the highest sales share by distribution channel with 42 percent of the year’s overall sales.

Some of the brands marketed by Flowers Foods’ include: Tastykake, Mrs. Freshley's, European Bakers, BlueBird, Dave’s Killer Bread and Mi Casa. The company also sells returned and surplus products through a network of over 200 discount bakery stores.
This text provides general information. Statista assumes no liability for the information given being complete or correct. Due to varying update cycles, statistics can display more up-to-date data than referenced in the text.
Published by Statista Research Department, Nov 23, 2021

Dollar sales of the leading fresh bread brands of the U.S. 2015

Dollar sales of the leading bakery snack vendors in the U.S. 2021

Unit sales of the leading bakery snack vendors in the U.S. 2021 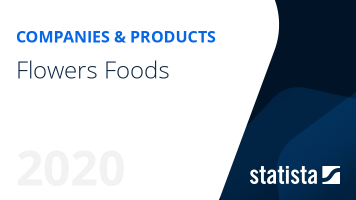 The most important key figures provide you with a compact summary of the topic of "Flowers Foods" and take you straight to the corresponding statistics.