Published by Statista Research Department, Oct 27, 2021
In general, biotechnology is the use of biological systems and living organisms to make or modify products or processes for specific purposes. Agriculture, food production, and medicine are the most important areas of application of biotechnology, along with interdisciplinary fields such as genomics, applied immunology, and the development of pharmaceutical therapies and diagnostic tests. Biotech in medicine lately came into focus due to the discovery and development of mRNA-based COVID-19 vaccines, like those by BioNTech/Pfizer and Moderna.

A sector on the rise

This sector is of increasing importance among leading European companies, generating tens of billions of U.S. dollars in revenue and nearly 100 thousand jobs. Over the last few years, the biotechnology sector became one of the most innovative industries in the European Union, with almost 7,300 patent applications filed at the EPO in 2019. However, because of the extremely high research and development costs, many European biotechnology companies must partner with larger firms to complete the development of their products and patents.

Together with the United States, Europe is the major global region for biotechnology. Among the leading biotech companies with headquarters in Europe are Swiss pharma giants Roche and Novartis, although these companies are not focused only on biotech-derived, but also on classic chemical-pharmaceutical products. Further European companies are well-known names like AstraZeneca, Novo Nordisk, and Sanofi. There are also smaller, more biotech-focused companies like Danish Genmab and Novozymes, or Belgian UCB. In the meantime, the London metro area represents the major biotech cluster on the continent, followed by the metro areas of Zürich, Paris, and Berlin.

The use of biotechnology in agriculture, food production and medicine is also a widely discussed topic due to its effects on the environment and human health. Some of the most pressing ethical issues regarding this industry are, for example, the use of humans in clinical trials, genetically modified crops, genetic engineering, animal testing, bioterrorism and stem cell research.

In the following 5 chapters, you will quickly find the 25 most important statistics relating to "Biotechnology in Europe".

Statistics on the topic
Venture capital financing in European and U.S. biotech industry in 2020
18.1 bn USD
Top global company by biotech revenue in 2021
Pfizer
Country with the highest number of biotech patents in 2018
Germany

The most important key figures provide you with a compact summary of the topic of "Biotechnology in Europe" and take you straight to the corresponding statistics.

Pharmaceutical industry in the UK 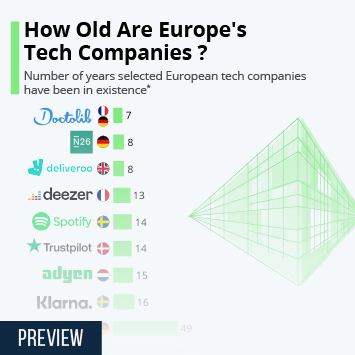 number of years selected European tech companies have been in existence