Published by
Matej Mikulic,
Sep 24, 2021
Despite the influence of several emerging countries, the United States has captured a dominant share of the pharmaceutical market worldwide. The country is home to some of the biggest pharma companies worldwide, and American consumers have access to one of the most advanced pharmaceutical systems in the world, albeit at a cost.

Pharma companies in the U.S.

Pharmaceutical sales revenues in the United States have accounted for nearly half of the global total in recent years. Five of the 10 leading pharmaceutical companies worldwide were from the U.S. in 2020. AbbVie is the new number one U.S. company based on prescription drug revenues, heavily boosted by its bestseller drug Humira. Johnson & Johnson is another U.S. company that has made a big impression around the world, with the pharmaceutical segment of its operations generating a record 45.6 billion U.S. dollars in 2020.

The U.S. pharmaceutical industry has made great strides over the past few decades due to a greater focus on research and development (R&D). Pharma companies spend over 21 percent of their revenues on R&D, and this sizeable investment is wasted if a medication does not receive regulatory approval. The R&D expenditure of the U.S. pharmaceutical industry totaled some 91 billion U.S. dollars in 2020. It is very likely that this figure will significantly increase in the years to come due to the costs associated with developing safe and effective COVID-19 treatments and vaccines.

The high costs of prescription drugs

Prescription drug prices in the United States are among the highest in the world, and recent years have been especially profitable for the American pharmaceutical industry. The blockbuster drug Humira, which is developed by AbbVie, generated approximately 21 billion U.S. dollars from sales in the United States in 2019. Overall spending on medicines in the U.S. has by far exceeded half a trillion billion U.S. dollars, even when factoring discounts and rebates that help to lower costs. Soaring prices and increasing premiums are sources of constant debate, and more than two-thirds of Americans believe drug prices are usually much higher than what consumers should be paying.

In the following 7 chapters, you will quickly find the 41 most important statistics relating to "Pharmaceutical industry in the U.S.".

The most important key figures provide you with a compact summary of the topic of "Pharmaceutical industry in the U.S." and take you straight to the corresponding statistics.

Pharmaceutical industry in the UK 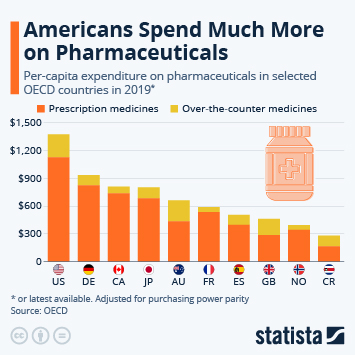 Which Countries Pay The Most For Medicinal Drugs 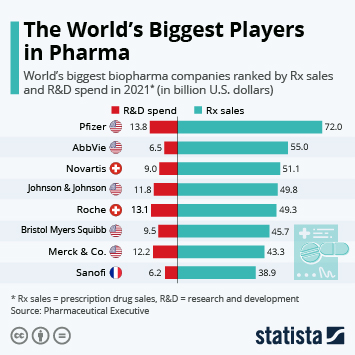