Cambridge-based AstraZeneca and London-based GlaxoSmithKline are the two flagships of the British drug manufacturing industry. For several years, GlaxoSmithKline was the leading pharmaceutical company in the UK based on market capitalization. However, AstraZeneca received a significant boost on the market, not least because of developing the most used COVID-19 vaccine worldwide, together with a team at Oxford University. As of September 2021, AstraZeneca was reported to have a market capitalization of around 127 billion British pounds.

In 2019, consumers in the United Kingdom spent nearly 11 billion British pounds on pharmaceutical products. This was a nine percent increase in sales value compared to the previous year. The most valuable categories in the over-the-counter (OTC) market were pain relief, vitamins and minerals, and cough/cold remedies.

In the following 6 chapters, you will quickly find the 35 most important statistics relating to "Pharmaceutical industry in the UK".

The most important key figures provide you with a compact summary of the topic of "Pharmaceutical industry in the UK" and take you straight to the corresponding statistics.

COVID-19 vaccination in the UK 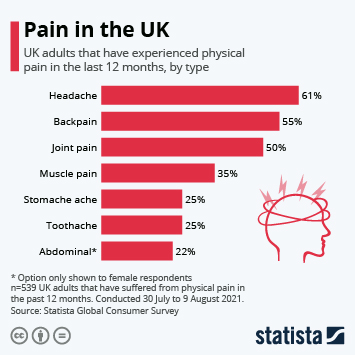