Smartphones in the U.S. - Statistics & Facts

Apple and Samsung produce the most popular smartphones

Apple and Samsung are the market leaders in the U.S. smartphone market. Together the two manufacturers account for almost 80 percent of smartphone unit sales in the country. Apple’s iPhone is the most popular smartphone with U.S. American consumers, with 51 percent of subscribers using an Apple device as of January 2022.

5G capabilities are now a standard feature of flagship smartphones, with 5G-capable smartphones accounting for 57 percent of all smartphone sales in the first quarter of 2021. This growth is only likely to increase in coming years, with several 5G capable phones and foldable smartphones set to be released, including at the low budget devices in the market.

Samsung established an early lead in the 5G smartphone market in the United States, accounting for around 75 percent of 5G smartphones sold in 2019.

The launch of the 5G-capable iPhone 12 points to the demand for 5G products in the marketplace. The iPhone 12 launch helped propel Apple’s market share from 40 percent in the third quarter of 2020 to 65 percent in the fourth quarter of 2020, eating into Samsung’s 5G lead. In a survey conducted prior to the release of the iPhone 12, 79 percent of respondents said 5G capability was an important factor they considered when deciding to upgrade their device.
This text provides general information. Statista assumes no liability for the information given being complete or correct. Due to varying update cycles, statistics can display more up-to-date data than referenced in the text.
Published by S. O'Dea, May 31, 2022

Number of smartphone users in the United States
307m 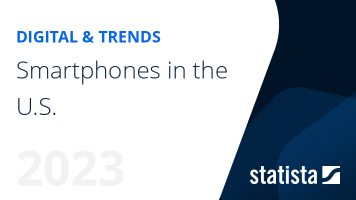 Go to report Smartphones in the United States
Top Seller

The most important key figures provide you with a compact summary of the topic of "US smartphone market" and take you straight to the corresponding statistics.