Frontier at a glance

Frontier’s business segments comprise voice services, data, and internet services, video services, and switched access and subsidy services. The company’s revenue has fluctuated throughout the years, and in April 2020, it declared Chapter 11 bankruptcy, also known as a reorganization bankruptcy. The following year, Frontier Communications generated around 6.4 billion U.S. dollars in revenue, most of which came from the data and internet service segment. Furthermore, in 2021, the company held total assets of around 16.5 billion U.S. dollars.

Over the years, the number of Frontier Communication’s business and residential customers has varied. After reaching its peak in 2016, this number started decreasing and reached a total of just above three million in 2021. Most of these customers used Frontier’s broadband services, totaling around 2.8 million broadband internet subscribers in 2021. Furthermore, in the same year, Frontier Communications’ monthly churn rate stood at 1.5 percent, down from the 1.7 percent recorded in the previous year.

Frontier competes with several strong market players across the various segments it operates in. In the telecommunication sector, its main rivals are AT&T and Verizon, which, as of 2022, have a fiber broadband coverage of around 12 percent and 11 percent of the population in the United States, respectively. By contrast, in the Pay TV market, Frontier competes with the likes of Comcast Corporation and AT&T Premium TV, with both recording excess of 15 million subscribers in 2021.
This text provides general information. Statista assumes no liability for the information given being complete or correct. Due to varying update cycles, statistics can display more up-to-date data than referenced in the text.
Published by Statista Research Department, Sep 5, 2022

Number of fixed broadband subscribers in the United States 2022
109.9m

Fixed broadband internet subscribers in the United States 2010-2022, by quarter

Frontier Communications broadband service availability by speed in the U.S, 2016 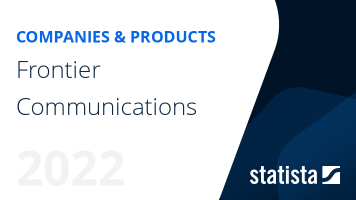 The most important key figures provide you with a compact summary of the topic of "Frontier Communications" and take you straight to the corresponding statistics.