Vivendi SA, based in Paris, is one of the leading media companies in Europe. In 2016, the total revenues of the French mass media conglomerate amounted to more than 10.8 billion euros, an increase of 0.5 percent compared to the previous year.
The highest share in Vivendi's revenues went to its subsidiary Universal Music Group in 2016. The global music corporation generated revenues of more than 5.26 billion euros that year. Universal Music Group is one of the leading music labels worldwide. Canal+ Group, the leading pay TV provider in France, took the second highest share in Vivendi's revenues at 5.25 billion euros. As of December 31, 2016, the number of Vivendi SA employees around the globe amounted to 22.6 thousand.
In June 2016, Vivendi announced the takeover of Gameloft, one of the leading developers and publishers of video games for mobile devices worldwide. Vivendi also owned the German subscription video on demand service Watchever until it ceased operations at the end of 2016.
This text provides general information. Statista assumes no liability for the information given being complete or correct. Due to varying update cycles, statistics can display more up-to-date data than referenced in the text.
Published by Statista Research Department, Jan 6, 2023 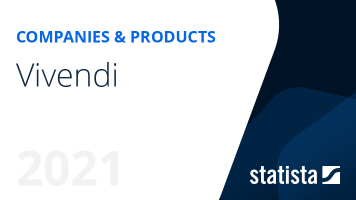 The most important key figures provide you with a compact summary of the topic of "Vivendi" and take you straight to the corresponding statistics.