Published by
Amy Watson,
Oct 9, 2019
The Emmy Awards is an annual American award ceremony held in recognition of excellence in television programming, production, and performance. It is the television industry’s equivalent of the Oscars, the Grammy Awards, and the Tony Awards, that recognize outstanding artistic achievements in film, music, and theater respectively.
The Emmy Awards were established by the National Academy of Television Arts and Sciences (ATAS) and were first held in 1949. It initially debuted as an award show for only locally televised programs in the Los Angeles area, but has since grown to be a national event that is broadcast across the country. The Emmys are famous for their statuettes that depict a winged woman holding an atom and the annual telecast boasts millions of viewers each year. Furthermore, nearly a third of young adults view Emmy awards as a relevant factor in their entertainment consumption.

The Emmys currently comprise different annual ceremonies held throughout the year that cater to specific sectors of the television industry. The two most prominent are the Primetime Emmy Awards and the Daytime Emmy Awards. In 2018, Game of Thrones was the program that received that most number of Primetime Emmy Awards and HBO was the studio with the highest number of nominations. Saturday Night Live has earned the more Primetime Emmy awards than any other show on television, with a grand total of 54 individual awards (726527), while the show’s producer, Lorne Michaels, takes the top spot as the most Emmy-Nominated individual of all time.

The Emmys recently experienced a sudden drop in TV ratings as the number of Primetime Emmy Awards viewers hit an all time low in 2018. The Emmys also continue to face challenges in the area of diversity, specifically in race and gender inequality. This is due largely to the rather lopsided distribution of winners and nominees, by gender (largely in favor of men) as well as ethnicity.

Other notable Emmy ceremonies include the: Sports Emmys, News and Documentary Emmys, Engineering Emmys, Regional and International Emmys, as well as the College Television Awards.

In the following 5 chapters, you will quickly find the 31 most important statistics relating to "The Emmy Awards".

Statistics on the topic
Number of viewers of The Big Bang Theory in its 2018/19 season
17.44m
Most popular digital original series based on times difference from averagle title 2020
Stranger Things
Average production cost of an episode of Game of Thrones 2019
15m USD

The most important key figures provide you with a compact summary of the topic of "The Emmy Awards" and take you straight to the corresponding statistics. 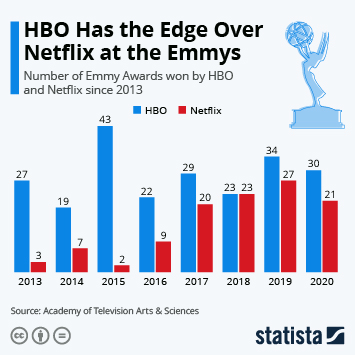