Published by
Julia Stoll,
May 30, 2022
There are several awards ceremonies recognizing achievements in film and television. Ever since the first ceremony was televised in the 1950s, award shows have become some of the most highly promoted and most anticipated live events in TV history, with coverage ranging from the actual show to red carpet appearances and after-show parties. The Academy Awards are the leading TV and movie award show in the United States based on television viewers, followed by Emmys and the Golden Globes. While each telecast still attracts millions of viewers worldwide, audience numbers have visibly dwindled.

The Academy Awards are the most prestigious awards show in the entertainment industry. Each year, celebrities flock to the Dolby Theater in Los Angeles to witness the recognition of the biggest names in film. As of 2022, actress Katharine Hepburn has won the most Academy Awards, while “Ben-Hur” and “Titanic” remain the movies with the most Oscar wins of all time. Back in 1998, when James Cameron’s "Titanic” received 11 awards, the Oscars drew an audience of 55 million people. Since then, Academy Award viewership has steadily declined to reach an all-time low of 10.4 million viewers in 2021. Although audience grew again one year later, the show was still well below past years.

The Golden Globes, organized by the Hollywood Foreign Press Association, honor cinematic achievements in television and film. Usually held at the Beverly Hilton Hotel in California, the 78th Golden Globes took place in a mostly virtual setting in 2021 due to coronavirus restrictions. As laureates received their awards remotely, the number of Golden Globes viewers plummeted to 5.4 million in 2021. As NBC dropped the event, a TV broadcast was skipped in 2022. In another noteworthy first, the ceremony’s list of winners was dominated by streaming services, as Netflix became the television network and movie studio to win the most Golden Globes that year.

The Emmys celebrate excellence in television programming, production, and performance. In 2020, the ABC telecast became Hollywood’s first major awards ceremony to be held in a virtual format, and while the show did not see as sharp an audience decline as it did in 2019, Primetime Emmy Awards viewership still dropped from 10.2 million in 2018 to 7.4 million in 2021. Netflix earned the highest number of Emmy wins that year, boosted by the network’s popular shows “The Crown” and “The Queen’s Gambit.”

Representation and inclusion have become much-discussed issues in the awards world, as the lists of voters, nominees, and winners do not fully reflect the diversity of moviegoers and film makers. Between 60 and 80 percent of voters at the Academy Awards are white and male, a pattern that is visible both on and off-screen across most major awards shows. While progress was made in 2021, when Chloé Zhao became the second woman in Golden Globes history to be awarded Best Director for her work on “Nomadland,” and the event also featured the highest number of female Golden Globes nominees in the Best Director category, minority representation still has a long way to go. To accelerate meaningful reform, NBC announced that the network would no longer broadcast the Golden Globes unless the HFPA member pool became more diverse.

In the following 6 chapters, you will quickly find the 38 most important statistics relating to "TV and movie awards shows".

The most important key figures provide you with a compact summary of the topic of "TV and movie awards shows" and take you straight to the corresponding statistics. 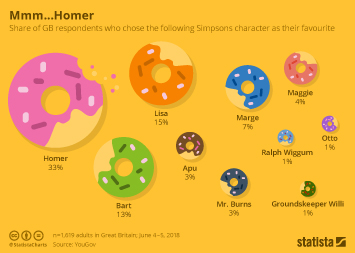