Published by
Julia Stoll,
Oct 21, 2021
Ernie Kovacs, an American comedian and actor, once said that television was called a medium because it was "neither rare nor well done.” His words may have rung true in the past, but with the advent of on-demand services, television has seen increased competition and investment as companies vie for consumers. Series such as “WandaVision” and “The Falcon and The Winter Soldier” had production costs of around 25 million U.S. dollars per episode in 2020, signifying that the “well done” comment is not quite as appropriate these days.

TV is one of the most popular media in the United States, reaching a daily time spent of over four hours among adults. However, estimates suggest that the number of hours per day watching television will considerably decline and in 2023, adults will only spend two hours and 50 minutes in front of a TV. Younger people seem to spend significantly less time watching television than their older counterparts as alternative forms of entertainment have begun to greatly increase in popularity.

These falling viewership numbers do not necessarily mean that people are watching less TV overall, just that they are beginning to turn away from traditional TV and move to for example subscription video-on-demand services such as Netflix. Consumers in the U.S. have been particularly quick to adopt new viewing technologies, but nevertheless, the number of TV households in the United States has continually increased over the last years. Some of the most popular programs overall include Netflix originals like “Stranger Things”, alongside traditional cable TV programs such as “Spongebob Squarepants” and “Saturday Night Life”.

One of the industry’s major sources of income is advertising, a revenue stream which is expected to remain relatively stable over the next few years with annual totals of nearly 70 billion U.S. dollars. In contrast, connected TV advertising spending amounted to around nine billion U.S. dollars, but as the popularity of online offerings continue to grow, this expenditure is expected to increase. Companies like Procter & Gamble, AT&T, and Berkshire Hathaway spend hundreds of millions of dollars each year on cable TV advertisement, and the country’s most popular programs charge hundreds of thousands of dollars for each 30-second advertisement spot.

Overall, the U.S. television market seems to have entered a time of transition rather than decline. Newer streaming platforms have made shows more accessible to many consumers, but networks that fail to adapt to these changes in consumer preferences are sure to lose their grip on the market.

In the following 9 chapters, you will quickly find the 48 most important statistics relating to "Television in the United States". 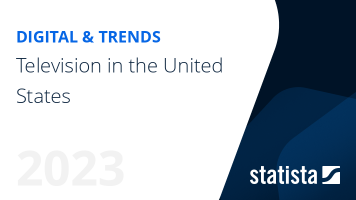 Go to report Television in the United States
Top Seller

The most important key figures provide you with a compact summary of the topic of "Television in the United States" and take you straight to the corresponding statistics.

Cable TV in the United States 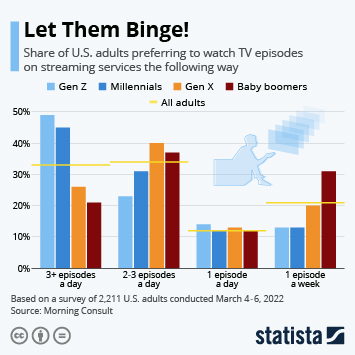 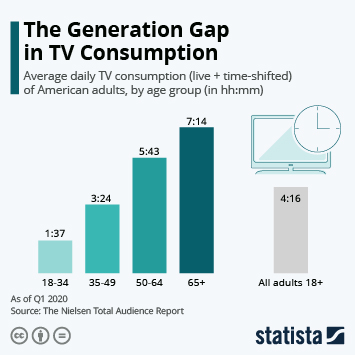 The Generation Gap in TV Consumption