The Tampa Bay Buccaneers are a professional football team that competes in the National Football League (NFL) in the National Football Conference’s (NFC) South division. The Florida-based NFL franchise joined the NFL as an expansion team in 1976. As of 2021, the Buccaneers had an estimated franchise value of around 2.94 billion U.S. dollars.
The Buccaneers (usually shortened to “the Bucs”) are currently owned by the Glazer family and play their home games at the Raymond Jay Stadium in Tampa, FL. In 2019, the Bucs had a total home attendance during the regular season of 355,102, while the team’s average home attendance for that year amounted to 50,728. The team’s revenue in 2020 stood at around 364 million U.S. dollars, while its operating income for that year was approximately 1.9 million U.S. dollars.

The Bucs are one of five teams to have won the Super Bowl on two occasions. Their first victory came in Super Bowl XXXV in 2002, when they beat the New York Gaints 34-7. Their second title success came in 2021 at Super Bowl LV, when legendary quarterback Tom Brady led the Bucs to a 31-9 win over then-reigning champions Kansas City Chiefs. The Bucs currently have a combined total of just over two million Facebook and Twitter fans and followers.
This text provides general information. Statista assumes no liability for the information given being complete or correct. Due to varying update cycles, statistics can display more up-to-date data than referenced in the text.

Christina Gough
Research expert covering sports and video gaming
Get in touch with us now
Published by Christina Gough, Oct 21, 2021 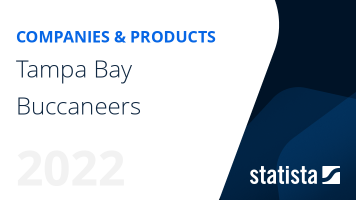 The most important key figures provide you with a compact summary of the topic of "Tampa Bay Buccaneers" and take you straight to the corresponding statistics.