As of 2020, the Carolina Panthers’ official Facebook and Twitter fan pages had a combined total of around 5.36 million fans and followers.

In the following 4 chapters, you will quickly find the 23 most important statistics relating to "Carolina Panthers". 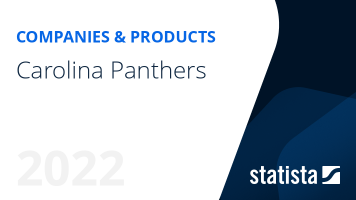 The most important key figures provide you with a compact summary of the topic of "Carolina Panthers" and take you straight to the corresponding statistics.