The Toronto Raptors are a Canadian professional basketball team that compete in the National Basketball Association’s Eastern Conference Atlantic division. The team was established in 1995 — along with the Vancouver Grizzlies — as part of the league’s expansion into Canada. The Raptors became the only Canadian-based NBA team in 2001, following the Grizzlies' relocation to Memphis, Tennessee to become the Memphis Grizzlies.
The Raptors play their home games at the Air Canada Center in downtown Toronto. During the 2019/20 NBA season, the average regular season home attendance for a Raptors game was 19,795 and total attendance for that season amounted to 633,456. The team’s current franchise value is estimated at around 2.15 billion U.S. dollars, while its operating income stood at around 79 million U.S. dollars in the 2019/20 regular season. In the same season, the team generated revenue of around 264 million U.S. dollars. The Raptors are currently owned Maple Leaf Sports & Entertainment, with Nigerian-Canadian former basketball player Masai Ujiri serving as the president of basketball operations.

Following five divisional titles between 2007 and 2018, the Raptors claimed their first NBA championship title in 2019, defeating the defending NBA champion, the Golden State Warriors, 4-2 in the finals. This made the franchise the first team based outside of the United States to claim a championship title. The team has a combined total of approximately 4.84 million fans and followers on Facebook and Twitter.
This text provides general information. Statista assumes no liability for the information given being complete or correct. Due to varying update cycles, statistics can display more up-to-date data than referenced in the text. 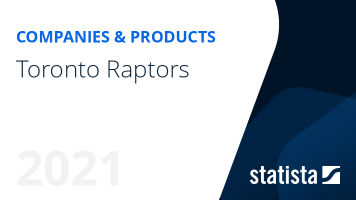 The most important key figures provide you with a compact summary of the topic of "Toronto Raptors" and take you straight to the corresponding statistics.