Papa John's Pizza is a U.S.-based restaurant franchise with its headquarters located in Jeffersontown, Kentucky. The company was founded in 1984 by ‘Papa’ John Schnatter in the converted broom closet of his father’s tavern. As well as pizza, the chain offers a range of other dishes including fried chicken, side dishes and desserts. In 2021, the global revenue of Papa John’s reached an all-time high of 2.07 billion U.S. dollars. Unlike many other companies, Papa John's worldwide revenue increased from 2019 to 2020 despite the coronavirus (COVID-19) pandemic. This was likely due to social distancing measures which caused consumers to dine out less and rely more heavily on delivery and takeaway options. Overall, consumer spending in the quick service restaurant (QRS) pizza sector in the U.S. increased during the pandemic.

Net income is the figure that informs a company about how much it earned or lost during an accounting period. As a result of negative publicity in July 2018, the net income of Papa John’s plummeted by nearly 100 million U.S. dollars, and this declining trend was reflected in its revenue streams. By 2021, however, the company rebounded and reported a net income of 120.02 million U.S. dollars. Papa John’s total assets worldwide amounted to 885.7 million that year, and the number of people employed by Papa John’s worldwide, was roughly 14,000. The company’s advertising costs fluctuated over the past decade and peaked in 2017. In 2021, Papa John’s advertising costs in the U.S. totaled 61.7 million U.S. dollars which was an increase over the previous year’s total of 56.7 million.

Is Papa John's a global brand?

From its beginnings inside of a Kentucky broom closet in 1984, Papa John’s has since expanded to become an international pizza chain with more than five thousand restaurants. In 2021, the number of Papa John’s restaurants worldwide was roughly 5,650. Of those stores, over three thousand were located in the United States, while the remaining establishments were situated in locations all across the globe. The United Kingdom had the most Papa John’s restaurants of any European country, with a total of 507 establishments in 2021. Meanwhile, in Asia, China had 226 establishments. Despite the company having a large international presence, the majority of Papa John’s worldwide revenue by segment was generated in North America by a considerable margin in 2021.
This text provides general information. Statista assumes no liability for the information given being complete or correct. Due to varying update cycles, statistics can display more up-to-date data than referenced in the text.
Published by Statista Research Department, Sep 13, 2022

Pizza restaurants in the U.S. 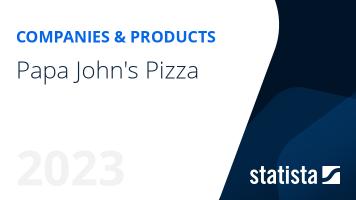 The most important key figures provide you with a compact summary of the topic of "Papa John's Pizza" and take you straight to the corresponding statistics.