The pizza market in the United States is divided into in-store deli food pizza offerings and the frozen food department. Pizza is very popular among consumers and probably American’s number one dinner choice. It is estimated that more than 200 million Americans eat frozen pizza, well over half the total U.S. population. The global frozen pizza market amounts to about 16.2 billion U.S. dollars, a value that is expected to grow to over 23 billion dollars by 2027.

The pizza retail department offers products such as refrigerated pizza, pizza kits, frozen pizza crust/dough, and frozen pizza. The leading vendors in the U.S. frozen pizza market are Nestlé USA and Schwan’s Company. Currently, the most popular frozen pizza brand in the US is DiGiorno (Nestlé), followed by Red Baron (Schwan’s Company), and private label products. Private label manufacturers are significant players in the U.S. frozen pizza retail market. Private label sales in the U.S. through supermarkets, mass merchants, military commissaries, and select club and dollar stores accounted for about 158.8 million U.S. dollars per quarter. It is estimated that nearly 63 million Americans eat one or two DiGiorno pizzas in a given month. DiGiorno’s market share is currently shrinking, while Freschetta (Schwan’s Company) and Red Baron have outpaced other pizza brands with their double-digit sales growth.

A fresh alternative to frozen pizza is to assemble one’s own pizza using store-bought pizza dough and pizza sauce. An estimated 85 million Americans used ready-made pizza crust while about 123 million Americans use pizza sauce. In addition to being the top frozen pizza brand, DiGiorno also leads the market for ready-made pizza crust.
This text provides general information. Statista assumes no liability for the information given being complete or correct. Due to varying update cycles, statistics can display more up-to-date data than referenced in the text.

Eloise Trenda
Research Expert covering global food topics with a focus on the French, Spanish, and LATAM markets
Get in touch with us now
Published by Eloise Trenda, Sep 15, 2021 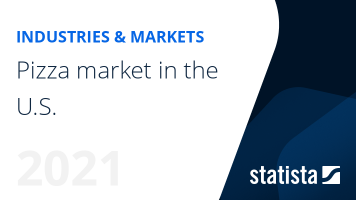 Go to report Pizza market in the U.S.
Top Seller

The most important key figures provide you with a compact summary of the topic of "U.S. Pizza market" and take you straight to the corresponding statistics.