Coffee, alongside tea belongs to India’s popular hot beverages. Although Indians have been cultivating coffee for hundreds of years, the first seeds of coffee were planted by Baba Budan (a saint) way back in the 1600s on the Chandragiri hills (now called Baba Budan Giri) in Chikmagalur district, Karnataka. Coffee plantations were established in and around Baba Budan Giri only in 1840. Even today, the production of coffee lies primarily in the hills of the southern region, of which Karnataka accounts for the highest yield.

Coffee production and trade in India

India ranked seventh in the production of coffee, while Brazil dominated production and exports globally in 2020. Vietnam was the largest producer of beans in Asia during the same time period. India stands seventh in export volumes worldwide and third in Asia after Vietnam and Indonesia. The country saw a drop in production and exports since 2017 due to torrential rains and flooding in its coffee-producing regions. Nonetheless, a majority of the coffee produced within the country is exported.

Filter coffee became popular when Indian Coffee House – a café of the 1940s, run by the Coffee Board of India served it on their menu, thus becoming the drink of many Indians. There are about 400 chains of the Indian Coffee House across the country, following the first one in Jabalpur.

The dawn of the 21st century saw establishments like Café Coffee Day, Barista, Costa Coffee, and Starbucks among other major players in the coffeehouse market. Independent and regional outlets continue to emerge mainly in urban centers, resulting in a highly fragmented retail market.

Cafe Coffee Day, in contrast, seemed to dominate the retail coffeehouse market with increasing revenues in recent years and a brand presence across the country. Today, the franchise operates across six countries, with café outlets in more than 200 cities in India. The country is one of the fastest-growing markets for coffee chains, and Indian consumers have embraced the international coffee culture.
This text provides general information. Statista assumes no liability for the information given being complete or correct. Due to varying update cycles, statistics can display more up-to-date data than referenced in the text.
Published by Statista Research Department, Jun 10, 2022 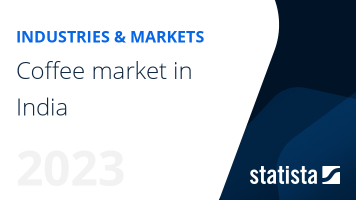 The most important key figures provide you with a compact summary of the topic of "Coffee market in India" and take you straight to the corresponding statistics.