Published by D. Clark, Sep 22, 2021
In recent years the city of London has frequently been in the headlines of the British press due to a noticeable surge in crime, with police recorded crime figures showing an increase of 168.76 thousand offences in 2019/20 compared to 2015/16. Much of this increase has been driven by a surge in violent crime, with the number of violent crime offences in London increasing from 186.5 thousand to more than 222 thousand during this same time period. Additionally, there has been a steady rise in the number of knife crimes which grew from 9.75 thousand to 15.9 thousand in this same period. By several measures, violent crime in London has gotten worse in the last few years.

The latest rise in crime is not unique to London, however. Across England and Wales there has been a recent uptick in overall crime following years of decline. This includes homicides, with 716 recorded in 2019/20 compared to 533 just six years earlier in 2013/14. With a rate of 82.9 crimes per 1,000 people, the crime rate for the Metropolitan Police was actually lower than that of several other police forces in 2020/21. Once it is put in perspective, it is clear that London’s recent surge in violent crime has not occurred in isolation from the rest of England.

Why is crime rising?

One of the main factors both the police and the press attribute the increasing crime figures to is the decline in the number of police officers across England and Wales in the last decade. London is no different in this regard, the Metropolitan Police and City of London Police have fewer officers than they had in 2010. At the same time, the police in general have been expected to operate with far less money than they had previously. In 2013/14 the budget for the Mayor’s Office for Police and Crime in London (MOPAC) shrunk by 300 million British pounds compared to the previous year. Controversial prevention methods such as stop and search have also decreased in no small part due to the perception that people are targeted unfairly based on their ethnic appearance.

In the following 4 chapters, you will quickly find the 25 most important statistics relating to "Crime in London".

The most important key figures provide you with a compact summary of the topic of "Crime in London" and take you straight to the corresponding statistics. 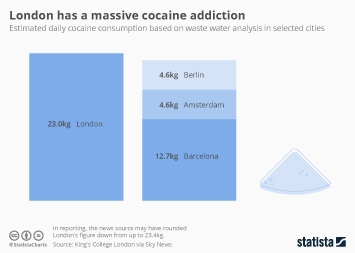 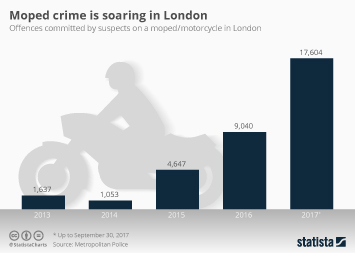 Moped crime is soaring in London