Games have been an intrinsic aspect of recreation in India right since ancient times. Board and dice games such as chess and snakes and ladders have their origins in Indian history, tracing back to the Indus Valley civilization. In today's times, the gaming industry is undergoing yet another massive evolution because of the mobile revolution. Investments from big players such as Alibaba, Tencent, Nazara and Youzu has led to a rapid growth of gaming in India.

The market value of the gaming industry in India was around two billion U.S. dollars in 2021 and was estimated to go up to seven billion U.S. dollars by 2026. The number of new job opportunities in the country's gaming industry is a clear indicator of the constant evolution of this sector. By 2022, the estimated number of employees within the market would be over 40 thousand.

Casual and real money games were two of the chief revenue earners within this sector. Surveys further indicated that shooting, fantasy sports, and role playing were popular gaming genres. In fact, the leading three games in India based on the number of active users, that is, Garena Free Fire, Mobile Premiere League and Dream 11 belonged to the shooting and fantasy sports genres. Besides casual gaming, Indian users have also exhibited an affinity for eSports. In the years to come, the eSports market is likely to expand significantly in terms of revenue, viewership, and the number of professional players.

As the country with the largest youth population in the world, India is embracing the new generation's interests in digital sports and entertainment. Although, the popularity of gaming consoles such as PlayStation and Xbox continue to grow amongst Indian consumers, a majority of the gaming population chooses to play on their mobile devices. Mobile gaming in the country is growing at a rapid rate due to development and affordability of smartphones. The market value of mobile gaming in India was estimated to reach about 405 million U.S. dollars by 2022.

India's mobile gaming audience grossed over 190 million as of 2022 and was primarily male, ranging between 25 and 44 years old. Mobile games were among the most installed apps among smartphone users as reported in 2021. Most Indian gamers were prone to downloading new mobile games several times a week, and preferred to watch ads to progress in their games. However, a fair share of Indian mobile gamers were found to play games in short intervals throughout the day, spending less than 10 minutes on each session.
This text provides general information. Statista assumes no liability for the information given being complete or correct. Due to varying update cycles, statistics can display more up-to-date data than referenced in the text.
Tanushree Basuroy
Research expert covering India
Get in touch with us now
Published by Tanushree Basuroy, Oct 4, 2022 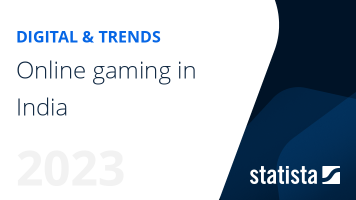