Published by Sandhya Keelery, Jul 15, 2020
India has emerged as the fastest growing mobile internet market in the world in recent years. With more than a billion mobile subscribers, and an ever-growing mobile internet penetration, the country has become a poster child for mobile communications. Indians took to mobile applications with ease and eagerness. In fact, in 2019, over 19 billion mobile apps were downloaded in the country, compared to just over six billion in 2016.
In 2019, 91 percent of Indians accessed social media via their mobile phones. Chat and social networking apps were the most popular that year with over 80 percent of mobile internet users accessing these apps regularly. Case in point being, the highest number of WhatsApp and TikTok mobile app downloads in the world were from India in 2020. That same year, Facebook had a share of over 87 percent in India’s mobile social media market. Similarly, Video streaming apps also enjoyed a wide reach in the country and over 90 percent of YouTube viewership in India was via mobile devices.

Apart from social media, the use of mobile shopping apps as well as mobile payments were growing in the country. Huge advertising budgets from e-commerce platforms like Amazon and Flipkart not only created a buzz about mobile shopping among Indians, but it also increased the acceptability of such services. Add to that the 2016 demonetization order from the government of India, where all 500- and-1,000-rupee notes were banned, millions of Indians were forced to adopt mobile payment methods like PayTM and Google Pay.

An average user spent nearly 4.5 hours on her/his phone daily. This involved availing services -ordering food, planning travel, playing games and hailing cab rides. Some of the biggest winners in recent years within the country’s app market were Ola cabs with the home advantage over Uber; Flipkart’s fashion retailer Myntra; TVoD leader Hotstar, music on demand Gaana, and movie and event ticket booking app BookMyShow. Among digital payments, Paytm was popular. Teen Patti, a popular card game which is the Indian version of poker, except with three cards instead of five, was also a gaming app with over five million downloads.

With so much mobile activity in the country, major business deals and investments in the sector seems obvious. In April 2020, Facebook Inc. announced an investment of over five billion U.S. dollars in Reliance Jio, which is India’s biggest telecom operator. This gave the social media giant a 99.9 percent stake in the company along with access to Jio’s extensive mobile network and subscriber database in the country. In turn, the deal gives Reliance access to the 400-million-strong database of WhatsApp (owned by Facebook) and integrate its hyper local e-commerce business, JioMart, with the messaging application. While India’s mobile internet market has tremendous potential, it remains to be seen if ends up becoming a Reliance monopoly.

In the following 5 chapters, you will quickly find the {amountStatistics} most important statistics relating to "Mobile app usage in India ".

The most important key figures provide you with a compact summary of the topic of "Mobile app usage in India " and take you straight to the corresponding statistics. 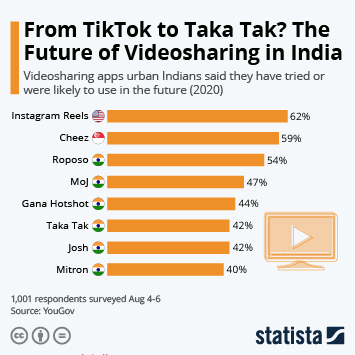