Published by Statista Research Department, Jan 10, 2022
While there is a range of factors determining the demographics of a country, Japan’s most prominent feature is its population development and age structure. Following high growth rates in the late 19th and early 20th century, population growth started slowing down after World War II. The population eventually reached its peak with more than 128 million people between 2007 and 2010. Low birthrate, as well as low levels of immigration, have led to a declining trend since then.
Despite the decreasing number of inhabitants, the population density in Japan remains to be one of the highest in Asia. The population is highly concentrated in metropolitan areas, most notably Tokyo, which is one of the world’s most populated cities, as well as Osaka and Nagoya. While many rural areas face depopulation tendencies, land prices in the three large metropolitan areas have been increasing again since the mid-2010s.

Japan’s population currently is not only shrinking, but it is also one of the fastest aging populations in the world. At the same time, it has one of the highest life expectancies. The cohort of people aged 65 years and older consisted of more than 36 million people in 2020 and was estimated to make up over 38 percent of the population by 2060. As a consequence of the country’s demographic changes, the Japanese economy today faces severe labor shortages, as is exemplified by a comparably low unemployment rate. Until recently, the workforce in Japan was shrinking rapidly, putting pressure on the social security system. But continued employment of the elderly and the growing integration of women into the labor market have kept the labor force relatively stable and even led to a slight increase in recent years.

The population in Japan appears largely homogenous compared to many other countries around the world. Yamato people - a term used since the 19th century for the ethnic group native to the Japanese archipelago to distinguish them from minority groups, such as Ainu, Ryukyuans, or Koreans and Taiwanese who had settled at peripheral areas of Japan - make up the overwhelming majority of the population. However, the number of foreign residents living in Japan has been growing. Since this group consists of the largest part of younger people, it also has a positive effect on the size of the workforce.

In the following 7 chapters, you will quickly find the 36 most important statistics relating to "Demographics of Japan".

The most important key figures provide you with a compact summary of the topic of "Demographics of Japan" and take you straight to the corresponding statistics.

Love and sex in Japan 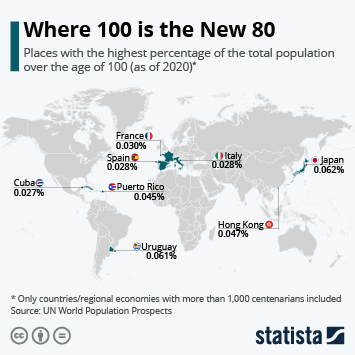 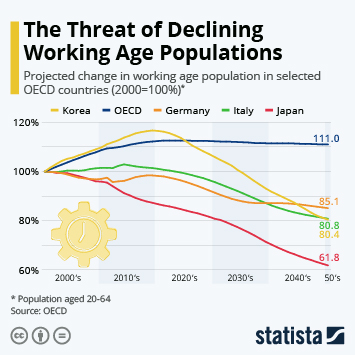