Tea is one of the most popular beverages worldwide. In 2021, more than 6.6 billion kilograms of tea were consumed globally, and nearly one-third was made in China. China is believed to be the birthplace of tea, consumed for medicinal reasons. The earliest credible record of tea drinking in China dates to around the 3rd century AD. For centuries, tea has been treated as China’s national drink and plays a significant cultural, social, and even religious role.
China is the world’s largest tea producer, exporter, and consumer. In 2020, China produced 2.74 thousand metric tons of tea, accounting for roughly 45 percent of the global tea production. Approximately three-fifths of China’s tea production was green tea, a tea made from unoxidized leaves. On the other hand, tea plantation acreage in China has been consistently growing, with the most prolific tea-cultivation areas lying around and south of the Yangtze River valley in Guizhou, Yunnan, Sichuan, and Hubei provinces.

When it comes to international trade, China exported more than two-billion U.S. dollars of tea annually, 700 million dollars more than Sri Lanka, which ranked second place. Green tea accounts for the largest proportion of China’s total tea exports. Though Hong Kong is China’s largest tea exporting destination in terms of trade value, the largest amount of tea exports from China went to Morocco, Uzbekistan, and some West African countries. When it comes to imports, Sri Lanka, Taiwan, and India are China’s most crucial tea import partners, and black tea makes up the absolute majority of tea imported to China.

According to a Statista survey, around 95 percent of respondents said they were tea drinkers, and nearly one-third drink tea daily. Though most Chinese still prefer to enjoy tea at home, tea shops generated an increasing amount of profits in the past years due to the trend of freshly-brewed new-style beverages. The tea-based drinks infused with milk, fruits, and even cream cheese have recently won the hearts of many young Chinese consumers.
This text provides general information. Statista assumes no liability for the information given being complete or correct. Due to varying update cycles, statistics can display more up-to-date data than referenced in the text.

Yihan Ma
Research expert covering e-commerce and FMCG in Greater China
Get in touch with us now
Published by Yihan Ma, Apr 19, 2022 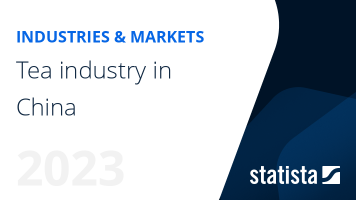 The most important key figures provide you with a compact summary of the topic of "Tea industry in China" and take you straight to the corresponding statistics.